October 10, 2011
I am delighted to have my very first interview with someone other than myself!  Introducing Julie Dearborn, writer, teacher, and brave soul to be first.


Describe a significant change/transition/turnover that you have experienced or that you are experiencing currently:
I moved to Spain in the early nineties to teach English.  I was no longer in my twenties.  I moved because I hated my job, was finished with graduate school, which had been the focus of my life, and I was just kind of bored with everything, especially myself.  I wanted to recapture the feeling I’d had when I moved to San Francisco a few months after graduating from college in the Midwest:  a feeling that every day, even a day that sucked, was exciting and that the next day would be even more exciting, regardless of how good or bad the current day was; a feeling that life was wide open.  Every time I stepped out the door, and walked around San Francisco, or took a bus in San Francisco, or drank a latte at a café in San Francisco, or had a drink in a bar in San Francisco, I felt a kind of blissful gratitude that there was such a place as San Francisco and that I had managed to find a way to live there.  But after a decade, this feeling had diminished.  San Francisco was still San Francisco, and therefore, to me, the ideal city, but my initial blazing passion for it had morphed into a calm, steady glow.  Our relationship had grown stale and since we weren’t married, not legally bound to each other, I was free to see other cities, not just for a two-week vacation fling, but for as long as I wanted.  San Francisco, being San Francisco, did not hold me back. 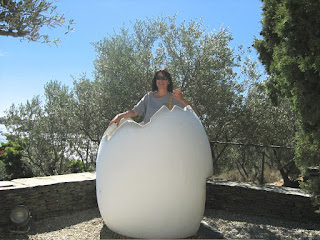 Julie, emerging
So I left for Barcelona. another city full of wonders: the winding alleys and Medieval buildings of the Barrio Gotico, the enchantingly strange architecture of Gaudi, the strong coffee, the cafes on the beach, the Mediterranean Sea, with water warm enough for a midnight swim, and Tibidabo, a mountain above the city with an amusement park built in 1899 next to a Catholic church build in 1902.  I loved that the Ferris wheel was older than the church.  The view from Tibidabo is so spectacular the devil is said to have tempted Christ with it.  “ Tibi dabo” he said.  “I give it to you.”   All Jesus had to do was kneel before the devil and Barcelona was his.  Jesus, being the Son of God, resisted the temptation, but it must have been hard.  The human part of him must have looked down at that beautiful city and thought, “I want it.”  I wanted it too, and I didn’t have to resist.  For two years, Barcelona was mine.  I wandered the alleys almost every day and consumed so much of the strong coffee that my jaw ached from grinding my teeth.  I drank sangria on Las Ramblas, Lorca’s favorite street, I ate Spanish olives and calamari and every other kind of tapas available.  But no matter what I was eating or drinking, no matter what cathedral I gazed at, awestruck, no matter how warm the Mediterranean Sea felt when I dipped my toes into it, Barcelona never felt permanent.  And so, after a few years, I wanted to go home.  And San Francisco, being San Francisco took me back.  Sometimes you have to leave a place to learn it is where you belong.


Thank you Julie!!!  And let it be known how glad I am that San Francisco is your home.  Want to read more of Julie's work?  Find her in the Summerset Review