Killing my darlings: a revisionist view of myself as the City

February 16, 2012
I've been immersed in novel revision for the last several weeks, enjoying my new-found free time by trying to tame the unwieldybeast.  It's going well, and I always forget how deeply satisfying it is to feel like your work is actually getting better.  So often, the slogging-through process leaves me uninspired.  I've clocked between five and eight hours a day for the past few weeks, something I haven't been able to do since my MFA program (and not even that often then, as I was working full-time).  The creation and revision process are so different: if I clocked five hours of creation time, I think I'd have to take three days off just to recover.  It's like that over-used, but still poignant parable of the tribal travelers having to pause to let their souls catch up with their bodies.  But, revision is different.  It can be more ruthless than the creation process.

A few versions (and years) ago, I had a narrator in the novel that was supposed to be San Francisco.  I fancied the City like a really awesome, beloved aunt, a creative-type who wore paint-stained overalls, spouted salt of the earth wisdom and exuded life.  I now realize, I think I wanted to be this image.  Ultimately, it really did not work for the novel, but I was very fond of it at the time and I recently found a page that I'd printed out to keep.  Stephen King is attributed with saying that you have to "kill your darlings" in revision.  True enough, Mr. King, but then sometimes your darlings can come back to life, and live on through your blog.  And then you can make your friends read them. :)

The red-orange bridge spans, dips and soars again, signaling the entrance to a place of adventure, diversity, adversity.  I am a city of expanding lives that plummet and rise toward a bigger understanding of how they belong in the world.  These lives kaleidoscope into mesmerizing patters, connecting and disconnecting according to a silent rhythm. 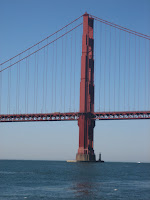 Occasionally, I intervene in humanity with a cracked sidewalk or road closure that forces someone out of  their well-worn path long enough to see that maybe, just maybe, there could be more than what they thought was there.  Maybe they'll reach out for someone, or maybe they'll become still enough to hear the flow around them.

My intersections and cross streets, my winding wonders of Vermont and Lombard streets, my cable car routes and bus lines that span the city: all these lines of connection are drawn throughout, like a physics of relationship.  From a distance, the Muni buses appear as caterpillars, their magnetic feelers seeking out the unhidden cable trail above as they navigate the Heights: Bernal, Laurel, Pacific.  And the Valleys: Hayes, Cole and Noe.  Stairways climb through steep front yards in the sloped parts of the city leading to pockets of wild parrots and hidden stories.  Golden Gate Park is an interruption of green that slices toward the ocean.  Flanked by hills and houses, it is my serene center, my playground, my lungs.  I love my many absurd juxtapositions there: bison, windmills, the arboretum and museum.  Underneath the surface dissimilarities lies an emotional logic that will not be kept secret from those truly searching.

Obsessed with San Francisco, me?  Maybe (more than) a little bit.  But that is the beauty of writing fiction: you can (sort of) hide your personal form of crazy behind words and characters.