Instant Narrative: writing as an exhibitionist

March 06, 2012
Oh my goodness, three hours of live writing as performance art in the San Francisco Museum of Modern Art was thrilling!  And nerve-wracking!  And for a few unfortunate minutes, boring!  But mostly it was incredibly interesting to be a part of the exhibit by Dora Garcia.

I sat at a simple table for a desk, typing onto a tiny Mac using a program that Dora created.  It was simple: type, type, send.  And the words appeared on the large screen projected to my right, which were the only thing adorning the wall to my right.  What was a challenge, of course, was finding the words.  The idea was to create an instant narrative, so to respond to those in the room, or the room itself, in a moment by moment basis.  Now, I am a fantastic people watcher.  I have a PhD in eavesdropping and an honorary doctorate from myself on making up stories about the people I'm watching.  But that wasn't what this exhibit was about (and good thing too: I'd hate to reveal how silly some of those stories are).  This was an artist's creation, and I felt an obligation to stay true to that artist's vision while also being the one who got to interpret it for those three hours.  So, I wrote a lot about people's shoes and the sounds they made (seriously, I had no idea how many different sounds each type of shoe and its wearer made).  I mentioned the enormous white walls too many times.  And I tried to acknowledge in words what was happening in the room without directly making things happen (I was not there to be a puppet master.  Though that would have been fun too). 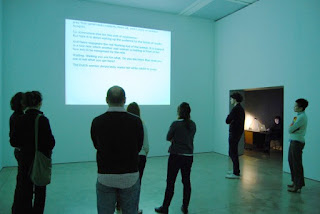 Photo by James Royall from the SFMOMA Open Space blog
My favorite/most terrifying parts was when someone in the room figured out that they could influence the words and would do something: drop their book on purpose, whistle, sit on the floor and stare at the screen until a note about someone sitting on the floor appeared.  I giggled when a man came up and asked if I was using the room as my office.  At first I thought he was offended, but it turned out he was just funny.

There was another art installation in the room, one I need to go back and see for myself, of paintings.  Next to each painting, a pair of headphones rested and you could listen to a narrative about the painting (I assume anyway, I didn't actually get to try them out yesterday).  These headphones were my lifeline, because it gave everyone something else to do if the words on the screen weren't interesting enough.
I have volunteered at the Contemporary Jewish Museum since its opening in 2008, but hadn't had the chance to do anything yet at the MoMA.  So that experience alone was worth it.  It was one of those moments that I got to do something exactly like what I hoped being a grown up would be like: artsy, weird and filled with stories.

One thing I've witnessed in both the CJM and then again yesterday at the MoMA is how the security guards really do have one of the hardest jobs ever: they have to remain alert while very little happens.  They have to stand on their feet for hours and hours and hours.  They have to tell different people the same thing over and over and over (seriously people, no flash photography).  And they have to remain patient and polite through it all.  They are often ridiculously kind.  I hope that the art they protect nurtures them and the people they keep safe give them a smile.

I go back in a couple weeks for one more round of live writing, and the exhibit is up until April 15th.  I recommend checking it out and contributing to the creation of an instant narrative.  Or, in lieu of that, creating one of your own, with or without a Mac.