A Walk on the not terribly Wild Side

March 08, 2012
In my last few Days/Hours/Moments of futzing with novel revisions, I realized I wanted to collect a few more sensory details on particular neighborhoods around SF (it might be the best form of procrastination ever).  I was inspired in part by a panel discussion I attended at the SF Writers Conference on the topic of Setting as Character.  It was there I first encountered the fantastically charming Cara Black and was captivated with how very much she has done with Paris throughout her novels, and how she's gone about collecting details.  So yesterday I took a walk that I have one of my characters doing so that I didn't miss any details that could enhance the story.  It was way more fun (and burned more calories) than sitting in front of the computer.  I was also reminded of just how beautiful this city is.  I've been here almost seven years and it still slays me that I get to live here.  Here is some pretty from my walk: 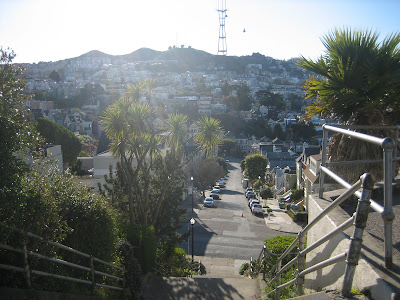 It's a bit blown out, but I love the crazy perspective from the perch atop the stairway.
This is the Liberty street stairway in Noe Valley.  I also love that a random bird was caught mid-flight, and looks a bit like a UFO headed for Sutro Tower. 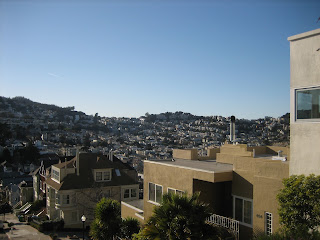 You say urban sprawl, I saw ahhhhhh pretty
There was also a fantastic addition to the mural wall on Laguna near Haight street: 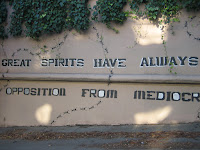 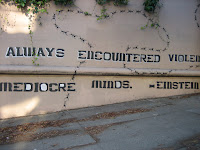 I don't have a panoramic camera obviously, but it reads
"Great spirits have always encountered violent opposition from mediocre minds,"
and is attributed to Einstein.
It was a fun exercise and tomorrow I'm heading to each of the character's neighborhoods to collect some more last minute sensory data and a few more pics.