May 24, 2012
I both love and hate Jim Shepard.  Love, because his stories are so ridiculously good.  Hate, because his stories are so ridiculously good.  Sometimes I wish I could program my brain to work like his just for one day.  I'm currently devouring his 2011 collection of short stories you think that's bad (he didn't capitalize it, so neither will I).  It's so much fun to read.  Every single story is transportive and I was trying to put my finger on all the reasons why that is the case.  The most obvious reason is the setting.  Each story is carefully placed in a land unfamiliar to me: the Netherlands in the near future, New Guinea, the Alps.  Each setting is vivid with weather and language and a sense of cultural flavor.  But I realized this morning that he actually accomplishes the whole setting thing through the use of the character's job.  What the character does for a living, whether it is climate control, military, or avalanche research, it's the specificities of the type of employment that create a transportive story.  For one thing, the characters all have jobs that are wildly different from anything I've ever done, and often have ones I really prefer to never have (avalanche researcher?  I don't even like to put my head under water).  But each character seems so perfectly wedded to their job in a way real people are, viewing the world in a distinct way based on how you put in your forty-plus hours a week.  It's transportive because I get to step into their shoes and because Shepard is so dang good at rendering something so fully and so authentically, I am immersed in their daily, hourly concerns. 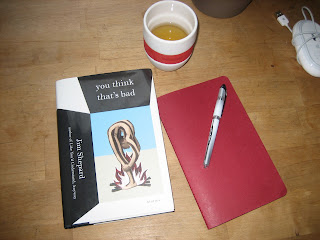 I too often constrain myself to giving my characters types of employment that are familiar to me (all those poor souls I've made suffer in office settings).  It takes boldness and research and sitting with the details long enough to understand how they would impact the character to make the leap into rendering such unfamiliar vocations.  Perhaps in my year of joblessness/writing, that's exactly the kind of challenge I should be trying.