June 19, 2012
I anthropomorphize things.  Back when I owned vehicles, they always had names (rest in peace Solid Gold!).  I felt genuinely bad for my old flip cell phone when it was replaced by my splashy iPhone.  I apologize to walls when I run into them.  And furniture too often becomes like family.

Enter the blue armchair.  I've had it as long as I've lived in San Francisco.  I got it at Thrift Town on Mission street, so it wasn't fancy to start with.  It has become less fancy through wear and tear and chocolate stains.  When I first got it, the neighbor's cat found it and decided it would smell better with a shot of male cat spray.  Forty shots of Febreeze and several months of avoidance later, it thankfully went back to smelling like a chair.  It's a little saggy and the back cushion had to be replaced with pillows.  It looks like this: 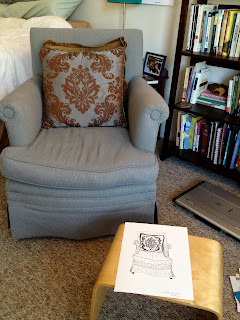 I've known for a while that it would someday be returned to the great thrift store in the sky (bless it, it's not actually comfortable), so a while back I wrote a short story to somehow put into words my feelings for my chair.

The blue armchair had felt so much.  He’d felt her sink into him luxuriously, tucking her feet underneath and dropping crumbs of generic cheese crackers while she read another novel borrowed from the New Fiction shelf at the downtown library.  He’d felt her fall into him at the end of a hard day, barely shifting from the fallen position for hours while she watched episode after episode of teary dramas.  He’d felt her sit timidly on the edge while she waited for a phone call or the doorbell to ring.  He’d felt her absence while she was swept away onto someone else’s furniture for weeks at a time.
He hated to do it, but he’d been old before coming to live at her place, and as such had some brokenness that caused pain after she sat for too long.  He hated to hurt her in any way, but his springs had a lifespan that had already been taxed.  She’d shift and struggle to find a different angle for her curvy hips but there was an inevitable timer-like quality to how long it was comfortable to sit there.  She’d finally give up and sigh, standing and stretching herself in cat-like ways to pop things back in a satisfying place.
She tried to keep him from being used as a coat rack, or dumping grounds.  But with so few objects available in her studio apartment he often became the default setting-down place.  His arm often protruded from beneath a pile of coats to look on legs ironically standing with nowhere left to sit.
The right arm was a touch frayed at the edge from where she picked at it while thinking.  He didn’t mind, he was glad he could help her out.  The chocolate stain on the cushion he did mind.  Despite her attempts to remove it, it just smeared into a fainter but bigger stain.  In defeat, she flipped the cushion over.  But that was the side that had sat in the sun in the former owner’s house and was faded because of it.  The effect was such that he thought it made him look weak or sickly.  It wasn’t that she didn’t notice, she just thought the sunburned side was less obvious than the chocolate stain side.  She was wrong.
One night she came home a little later than usual after work.  She looked at him for a long time before saying “I’m sorry” and sinking into the faded cushion.  She didn’t watch t.v. or pick up her book or talk on her phone.  She just sat there stroking the already frayed arm and looking out the window.  “Tomorrow I’ll have some Real Furniture.  Original owner.”  She laughed wryly.  “Purchased at a store that only sells things once and delivers.  We’ve had a long road together.  I guess it’s time for me to grow up.”  She tucked her legs underneath her and laid her head back into him.
The next day bustling men arrived, sweating in a hulking leather armchair.  The smell of newness burnt everyone’s eyes.  The blue armchair was gruffly lifted and moved to the hallway, revealing a collection of lost feathers, a few dried receipts and the one dumbbell she kept in the house for exercise and protection.  There was some quick swatting away of these things and then the new, bigger chair was plopped down in his place.  The men shifted it to accommodate the ottoman that came to sit like a servant bowing before its master.  The woman kept touching the leather, petting it, and subtly scooching it an inch left, inch right.  She almost didn’t see when the men hoisted him up to remove him.  He dangled at a height never before experienced and surveyed his surroundings from a perspective he’d never imagined.  But just as they passed under the door frame he heard her emit an alarmed “Oh!” as she rushed toward him.  He heard her ask:
“Where will you take him?”  Or maybe she said where will you take it, he can’t remember now.  Memory is a theater where only so much can appear on stage at once.
They mumbled in response, “We’ll take this to the factory.  There’s a regular recycling pick up that happens weekly.  Don’t worry.  It’s no extra charge to remove it.”
“But,” except she didn’t say anything else.  She just watched as they left, marching him down the long hallway and out to the truck.  They tossed him next to an old maroon couch and slammed the door shut.
Her new chair squeaked when she sat down on it.  It sounded like a protest, as if it wasn’t really designed for living in.