June 14, 2012
So I've been sorting through my closet (living in a studio means my closet is simultaneously my basement, my attic and my garage.  There's A LOT of stuff in there), and it's beginning to feel like I'm on an archeological dig through my life.  I keep finding random piles of photos that document a particular era in my life, long-lost treasures and just plain lost memories.  I also have a number of boxes that contain my mom's things, and every year I'm able to part with more, realizing what is actually important that she left behind (tiny little figurines that I can't actually remember her having, go.  Cards addressed to me from her, stay.  Photos that remind me of her being happy, display).

I was rewarded for my excavation efforts by finding a book I'd written when I was eight.  Actually, I found several.  My friend, Makiko Matsumoto, and I made countless books using recycled paper and duct tape for binding.  We then decorated these with our stories and illustrations and sold them to our neighbors.  We lived in an apartment complex of sympathetic seminary families, so we made a killing.  We sold them other things too, like painted rocks and homemade cards.  I would say our diversified products were a sign of early business savvy, but for me it was mostly about the money.

Some of these that I found include such auspicious titles as The Girl Who Loved Unicorns, and The Pooky Pals and Pooky Pals Two (Pooky Pals was a total rip off of the Care Bears).  There is also The Girl Who Hated Cleanness (apparently she also hated having her grammar corrected by her mother, because she refused to change the word to cleanliness).  Twenty-eight years later, I still pretty much write stories that I mine from my storehouse of emotional experience.  I was delighted to find one titled The Writer!  This was it: the book I could refer to in my future appearances on Oprah as an early clue to my future success. 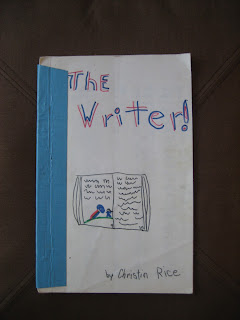 Allow me to read it to you, complete with misspellings, inconsistent commas, and a complete ignorance of how to use a period:

One fine day, a little girl named Sarah was writing a story about a girl with a pet rainbow, under a tree.  She had a wish to be a famous writer, and make lots of money, she would do anything to make books.  She would even die!  [okay, that's a bit dramatic] 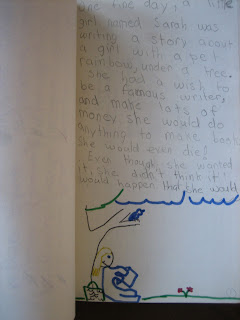 Even though she wanted it, she didn't think it would happen that she would be a famous writer, but one day her friend Cathey told her "Why don't you publish that book your making."  [oh, if only it was that easy Cathey]  "I don't think its good enough" Sarah said "its a stupid book" "No it isn't" Cathy said "I love that book, please publish it?"  "What if the people don't like this book?" Sarah asked.  [Yes, Cathey, what about that finicky marketplace, hm?]  "We'll talk about it at recess" Cathey said, and went off to school.


When they got tot he school, they got there they had a substitute, it was a very nice substitute teacher.  She let them talk (whisper) to each other, that ment that all day Sarah and Cathy talked.  [And that's how Cathey lost her e]


A few weeks passed and Sarah and Cathy were writing books together.  They had made 15 books all together.


Then when Sarah was 21 years old her first book was published.  It was a story about a dog (Sarah loves dogs) it was so good Sarah made others and then one day Sarah went broke.  [Apparently Sarah was not very good at money management at age 21]  Sarah started to work in a pet store and sell pets Sarah got very, very fond of animals and saved her monny to buy an animal.

One week after she started to work in the pet shop, people started to send monny to her [?] but still things went wrong.  Cathy died [!!!] and Sarah's mom had to go to the hospital because she was going to have a baby and all the monny money [ah, eight-year-old self discovers revision!] she got from the nice, nice people only got Sarah's bill payed off so Sarah started to cry then one day she was very lucky and her pet dog had saved Sarah's life, Sarah was crossing the street and was allmost hit by a car, but her dog saved her.


Sarah when she was 31 years old she made money by making very cute stuffed animals and soon she bought a house and another animal it was a cat.  [wow, my Etsy sales must have been out of this world]


Then one day a person came up to Sarah's door, and guess who it was? [no, seriously guys, guess!]  It was Cathy [WTF?!?] "I though you were dead" Sarah shouted.  "So did the Doctor and nurses, because I was not responding to the surgury" Cathy shouted. [Let's all agree to never go to that hospital]  They huged each other.


Sarah earned money by going to pet fairs and winning.  She was very happy to have animals around her.


Cathy got a dog, it was a girl, and it had puppies, she had 4 puppies.  Cathy gave two to Sarah and kept two to herself.


So it turns out instead of Sarah turning into a famous writer she turned into an animal lover. 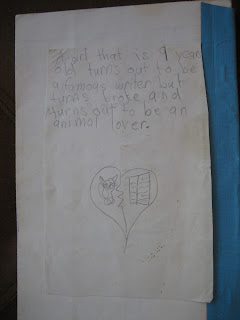 I think I'll go read The Girl Who Loved Unicorns as a palate cleanser.