July 16, 2012
There is a lot to be said for change begetting other changes.  After the big upheaval of packing, moving and unpacking, priority number one became: acquiring kittens!  The place just didn't seem complete without them.  Which is to say, introducing Scrabble and Clue! 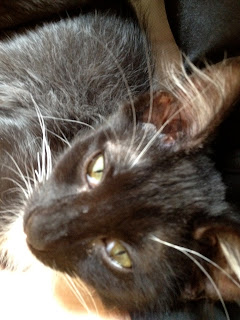 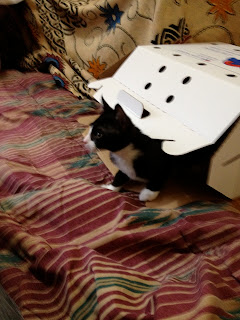 And here's Scrabble (she's the wordier one of the two).

They are three and a half month old sisters from the SPCA.  There was quite a bit of brainstorming around name choices.  Some ideas that almost made it but didn't were Boomer and Starbuck (from Battlestar Galactica), Strunk and White (but I'd forever be double-guessing my grammar usage around them), and Ruby and Perl (in honor of Dan's computer language background).  We settled on Scrabble and Clue as two favorite games from childhood, which was the last time we each had kittens.

Being able to "work from home" (euphemism for "writing," which is a euphemism for "staring at a blank page") means there is plenty of time for critical kitten interaction.  Luckily, they also have each other, which means that when they aren't sleeping they are attacking each other's face or teaching each other to climb the curtains.

Today was their first Muni ride on the way to the vet's for a quick post-adoption check up.  They were very polite bus kitties.  But then again, they were city strays, so for all I know they'd been taking public transportation all along.  [Clue just walked across my laptop and managed to select a paragraph and delete it.  I'm trying not to take that personally, and promised to help her set up her Twitter account as soon as I'm done here so she can have her say.]

Now if you'll excuse me, I need to press a little furball of cuteness to my cheek and swoon a bit more.