A Trip to the Crematorium

August 21, 2012
I love me a cemetery.  It was, in fact, the location of my very first date (an ominous beginning to a dating life).  I was 16.  We had a picnic on Daisy Mae Ordway's grave, and I was much too nervous at the time to remember anything about the conversation had.  My friends and I spent a lot of time near Daisy Mae Ordway that Summer.  This was Oakdale, CA, a 20-minute drive from my then-hometown of Waterford.  All of my then friends lived in Oakdale, so I stayed there as often as possible.  There was a good bit of sneaking out in the middle of the night to visit the cemetery down the road (this was the height of my short-lived rebellious period, so I think we might have shared a plastic cup of Pink Chablis--pronouned Chabliss by us ignoramuses--on the way) .  We were only spooked once, and that was when the sprinklers suddenly turned on one night.  Otherwise, I've always found cemeteries to be very good places to sit and meditate on life, death and all the many many things in between.

We don't really have cemeteries here in San Francisco.  There are a couple up in the Presidio (including a pet cemetery), but the rest were scooped up for land use back in the early 1900s.  The bodies were moved down to Daly City and beyond.  Enter the Neptune Society's Columbarium. 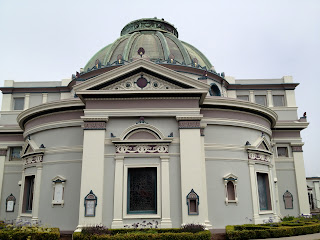 (this shot is a little off-center, which is how I felt after I left)


I visited the Columbarium this past weekend.  It is one weirdly quirky final resting place.  The genius of this place is that anyone of any faith (or no faith at all) is welcome.  And you can design the display of your remains like a diorama.  Or go minimalist and just display an urn.  Or have you and your partner placed inside matching Elvis cookie jars.  Most of The original "residents" went more the plaque-of-bronze style with only a family name to decorate their eternal real estate.  But nowadays, you get an empty glass case to design as you wish. 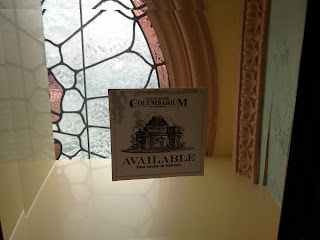 Available: your niche in history

There was some serious flair going on in some cases.  Many gorgeous, spare ones as well.  I found myself most drawn to those that had photos displayed in them, so I could grasp a little of the story of that person's life.  Several were all decked out, complete with birth dates and just the ominous phrase "not yet" for death date.  You have to appreciate the humor in that.  I was also really drawn to the cases where partners were memorialized together.   It was also really sweet that visitors were evident all around, not because there was anyone else there, but because they'd left behind cards, trinkets, little bottles of vodka left on the floor outside the case.  One card read "I miss you ignoring me."  That's dark. 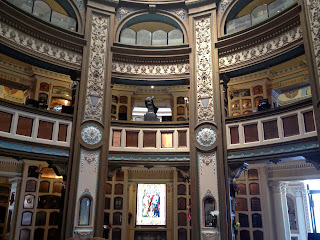 What was supremely creepy about the place was the piped in music.  It played on a continual loop, so these ragtime favorites repeated after every 6th or 7th song, and it takes a while to see the whole place, so I think I heard the album 3 times before leaving.  If you'd like to experience this creepiness for yourself, please press play:

The place was delightfully strange.  I don't really want to be housed there, but I did like the idea of designing a diorama of my life for others to see after I'm gone.  What would I put in it?  A pen probably, maybe a small painting.  Favorite photos of me with favorite people.  Perhaps a mini Sutro Tower :)  I also had the completely embarrassing realization that I'm becoming one of those ridiculous people who will find a way to be buried with their cats (there were a lot of animals inside people's boxes, in photo or ash form).  A mortality moment I've been able to avoid until this visit.  There is something about the Columbarium that makes your personal form of strange seem more acceptable though.  How San Franciscan of it.