An Ode to Naps

August 29, 2012
One of my favorite fringe benefits of my extended "sabbatical" from traditional work (read, the kind that gets you paid) is access to naps!  I have long been a fan of them, in fact, I thank my kindergarten teacher for instilling the value.  I'm quite certain I took naps before entering school, but I don't remember those. Kindergarten naps were the best.  I remember we each had a little blanket that we got to lay down on, the lights were turned out, and we had a giant stuffed animal octopus that we could snuggle with if it was our turn.  Everyone got one turn a month, as I recall.  He wasn't a particularly cuddly octopus, it was just cool to be special for that nap time.  Halfway through the year, a student in the class got very ill with some unremembered disease and we as a class decided to give her the octopus to express our sympathy.  Obviously, this was really the kindergarten teacher's idea and I resented her a bit for it.  I doubt they let kids take naps in school anymore, they'd get left behind if they did (blech), but man, I thought it was awesome.  You didn't have to fall asleep, you just had to be quiet for those few moments.

I still love naps, and now that I don't have to make myself pull it together in the afternoon, I indulge often.  They don't have to be long.  While a lovely hour-plus-long nap feels super luxurious (even more so if you really commit to it and put your pajamas back on), it also seems to require a half hour recovery time.  A fifteen minute one can do wonders.  I follow the same principle as I learned in kindergarten: turn off the lights, be still and it's okay if you don't fall asleep.  I find that as soon as I close my eyes, my thoughts are finally allowed to stop being logical and run every which way.  Sometimes this is interesting and seriously helpful in the creative process, other times it is quite mundane.  Sometimes there are no thoughts at all and just semi-darkness in the brain.  It's delicious.  (Can you tell I already took one today?)

One of the super fun things about kittens is how well they reflect this value back to me.  They fall into naps ten times a day, in all kinds of crazy positions, on top of any old surface, and don't apologize for it. 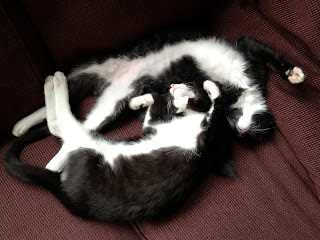 I've been doing some research on darkness for my writing, and stumbled on some really interesting stuff  about dreaming and time (I often feel like a scientist who discovers something by accident when really I'm just googling).  I found a fascinating article by Barbara Adam on Perceptions of Time (you can find it here via Scribd).  She discusses the invisibility of time, and how "...in spite of its omnipresence, time is curiously invisible and constitutes one of the most taken-for-granted features of our lives."  This struck me, as I really am trying to make the most of this unique time in my life.  Sometimes I feel like taking a nap can't be justified because I should be better using my time with more productive, awake things.  But honestly, more often than not, a nap is the vehicle for being able to not take my life for granted.  It's an invisible time that helps me see better when I am done, both internally and externally.

Apparently I really did learn everything I needed to know in kindergarten.