August 03, 2012
Last night, Dan and I went to hear Classical Mystery Tour, a Beatles cover band that played alongside the San Francisco Symphony.  It was a trip.  I swear, the whole time I was there, I was blogging.  I didn't take a single note, but every new thing that happened was getting filed away as: oh my, I need to blog this.

I love live music, even when it's not very good.  I love getting caught up in the whole event of a performance, in the enormous bravery it takes to stand in front of people and play music for them.  I was spoiled in undergrad with a wealth of opportunities to hear live music in cafes most nights of the week.  It wasn't always good, but it was always earnest, and sometimes it was really, really good.  San Francisco's live music scene isn't as easy to navigate.  If it's free, then it's painfully crowded.  Oftentimes when it's not free, it is also painfully crowded.  If it's not free, it can be quite expensive, which makes me inclined to see things I already know I like, rather than try something new.  And then there's always 70,000 other things going on the same night, so it's easy to miss something.

All that to say, I've been craving some live music.  Enter Classical Mystery Tour.   The night began with a cocktail. 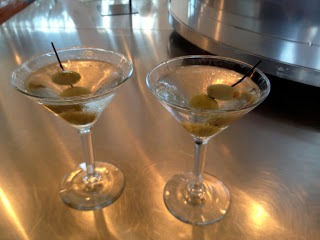 I love many things about a performance at the San Francisco Symphony, not least of which is a well-made martini

Our seats were fairly nose-bleedy (had to save some money for the aforementioned martini), but still decent.  And then the music began.  And then I was reminded about the problem with live music: all the other people there.  I was immediately distracted by two women sitting directly behind me who began singing along with the music and clapping an inch from my ear.  Throughout the performance, there were a couple invitations from the band for the audience to sing along.  These ladies took it to the next level and just sang along with everything, sometimes even when the band wasn't singing.  I found this particularly annoying when they sang along to songs I didn't know as well, since I could hear them better than I could hear the performers.

It's remarkable the power one head has over your view.  One woman leaning over the balcony obliterated 20% of the stage for me with her head, and a man right in front of me leaning in to illuminate what was going on to his young son sitting next to him obliterated another 20% of the stage.  I could still hear what was being performed, but not being able to see it left me even more distracted.  I couldn't help noticing the couple next to me, likely on a first-ish date.  He was WAY into the performance and she sat very stiffly throughout it.  Which made me finally realize I was being as annoying as she was by not just enjoying myself. 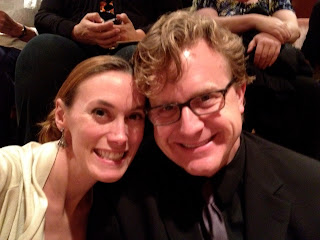 The experience of live music is a very body experience: you notice how comfortable (or un-) your seat is, you can't stop paying attention to the people in front of you shifting side to side, you're hot, then cold, then hot, then thirsty, then you have to pee, itch your ear, re-cross your legs without accidentally kicking the guy's head in front of your (or doing it on purpose if that is required).  All while really excellent music is going on around you.

Finally, right before intermission and even more so after, I was able to just go with it.  Which meant I was still only listening to little bits at a time.  But now I was transported, the music provided the scaffolding to all the memories that arose.  I did not grow up with the Beatles, and in fact, only began listening to their music a year ago, because Dan is a fan.  So the memories sparked had nothing to do with the actual songs.  Music often makes me think of my family: my mother, father, step mother and brother are all musical wizards.  I remembered my mom telling me once in church that it didn't matter if you sang well during the hymns, it just mattered that you sang loudly.  At the time I thought she was talking about herself, but now I'm not so sure.

The entire second half was a lovely blur of emotions and memories and music.  At one point I tuned back in to the present and wondered if those playing in the symphony ever wondered where people's minds wandered to during a performance.  I imagined everyone in the theater sitting together, but also simultaneously elsewhere, remembering their own moments.  I hope that there is at least one member of the symphony who feels proud of their skill in creating transportation this way.  What a gift to be able to create that moment for someone else through your talent and impressive practice.

The band was very fun, the symphony fantastic, but by far the person who stole the show for me was Sarah Hicks.  I have never encountered a conductor as hot as she.  She was the biggest rock star on stage with her sequined tank, long sleek white pants and ridiculously awesome heels.  She swayed and danced the entire concert.  In my next life I want to come back as her. 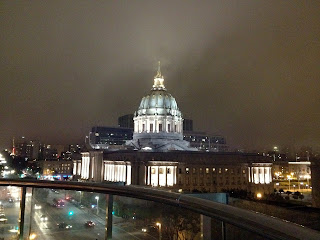 The view of City Hall in the fog.  I've had a crush on that building for a while now.

My need for live music has been sated, a little, for now.  But I see a Stern Grove concert in my future soon.