Iceland, your books I must read

September 04, 2012
Everything I've read about Iceland makes me think it's not really my culinary destiny (puffin breast? whale battered anything? cod, cod and more cod?), but I can't get quite enough of its literature.  And while walking into a bookstore sometimes overwhelms me with the possibilities, the sad but convenient fact is that there is relatively little icelandic literature translated into a language I can read, and even less of it available at the library.  Which still leaves a sizable chunk of reading available to me, but it's much less than a whole bookstore, so it feels almost manageable.  Here are my thoughts of three I've read so far: 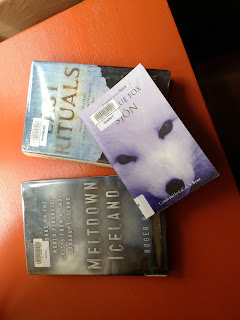 The Blue Fox, by Sjon (there's supposed to be an apostrophe above the o, but for the life of me I can't figure out how to get it there)

This dreamy book is a pocket-sized delight.  The beginning reads a bit like poetry with its creative use of white space, and indeed Sjon also has several poetry collections.  It's the story of a fox, a priest and a dead woman and the backdrop is an expanse of icy white Iceland.  Reading it reminded me of the magic in George MacDonald's writing.  The line between realism and magic seems almost pointless in the middle of an endless winter night full of avalanches.

This juicy story had me so captivated I couldn't wait to get back to it.  It reads a little like an Icelandic The Da Vinci Code, but I like Yrsa a whole lot more than I like Dan Brown (for starters, she apparently wrote 5 children's novels before this book and happens to be a hydro civil engineer, which is all just quite fascinating).  It's a detective story, and the murder in question has some super dark things going on with it.  This would be an excellent read for a long plane ride or a weekend of reading.

Both The Blue Fox and Last Rituals (as well as The Greenhouse by Audur Ava Olafsdottir, which I started but didn't finish) made me think about works in translation.  For one thing, I don't really feel I can say anything about the quality of the writing, because what I am reading has been filtered through a translator and their very particular word choices.  For instance, in The Greenhouse, the word "violet" turns up about 7 times in the first 15 pages.  There are other words to describe that color, and as it didn't seem at all to be an intentional choice that somehow furthered the story, I found myself really distracted.    All that to say, while I don't feel I can really say whether the writing is strong or not (though I suspect it is), I do feel confident that the stories in each of these are quite rich.

Okay, so this one is not written by an Icelander.  But it's a fantastic take on the financial meltdown experienced by Iceland, for its own sake as well as a study for ways of understanding the financial crisis in general for the rest of us.  The writing is so deliciously perfect creative non-fiction: highly factual, but chock full of the story behind the data.  The human drama and life-long feuds are so well described that it makes something as enormous as an entire country going bankrupt understandable.  I never really pick up an economics book with any sort of enthusiasm, generally because I assume I won't be able to really appreciate what's going on in it. But this one was so good I want to read it again.  And while I still can't quite wrap my mind around how we came to be in our current recession (it's like I have a subprime mortgage beta blocker in my brain), I now have a much more human perspective on the players who helped it be, at least those in Iceland.  More than that though, I feel like I gained a perspective on a people through an economic lens that was compassionate, informed and ultimately hopeful.

These three are headed back to the library today, and I'm jotting down my list of the next ones to check out.  As my pocket book likes to say, thank goodness for libraries!