September 10, 2012
I knew I wanted some more Sutro Tower for the living room, and was especially eyeing the space above the funky fireplace for just such a thing.  I planned on getting a canvas, perhaps something a little larger than I usually work with.  Then a friend called to say they were in an art supply store that was closing and would I like any of the clearance items?  Turns out they had some crazy deals on canvases and without really thinking of the measurements, I quickly said yes to what sounded like something sufficiently largish.  Perfect!  When I went to pick it up and transport it home on the bus, it really hit home just how dang huge the thing was. 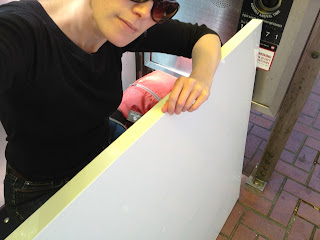 waiting at the bus stop

It was an awkward bus ride, mostly because it was so much more crowded than it should have been and no one seated around me seemed to comprehend my death-stares when they accidentally kept kicking my canvas.  But I finally got it home and quickly set to procrastinating over actually using it.

The thing is, the largeness of the canvas (36"x48") meant I needed to figure out how to work at a larger scale than anything I'd done before (other than painting walls, and that really doesn't count, now does it?).

I started painting when I started seminary, in 2000.  I'd been creative-writing this and that until that point, very rarely finishing anything, but when grad school started and suddenly I was inundated with academic writing, both the reading and writing of it, I just couldn't really stomach the idea of even more words.  So I turned to painting as an outlet, and it served me well.  It was a relief after all the mental gymnastics of theological studies to just use color.  I've never needed my painting to be my "thing" (like writing) so I'm way, way WAY more forgiving of the giant holes in skills that I have than I am in things I really want to succeed at.  Which makes it a genuine outlet.  I was raised with the sense that there was always something fun to do as long as there was something you could make, and you could make something out of just about anything.  I credit my mom for that.  So, with painting, my favorite part is still in experimenting with color (read: mucking with it until I find something I like) and trying out different materials (like salt, green tea, coffee grounds, house paint or feathers).  As a ten-year-old recently observed after spying my paintings for the first time, "So, you do abstract art."  Which is a very generous way of saying that while I can't make anything look like the thing it really is, I can sometimes make it feel like it, at least for myself.  She's ten, she likes to paint, we have an understanding.

So when I finally set to the enormous blank canvas I tried really really hard not to get freaked out by how huge the thing was, and took it step by step.  As I start my next novel and hope to try something much larger than what I've accomplished before in writing, its probably something I should to do more of.  No way to know how the writing will turn out yet, but here's how the blank canvas became a painting: 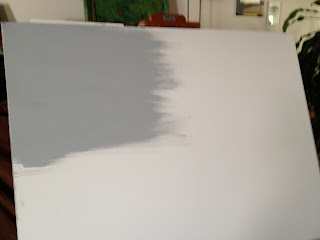 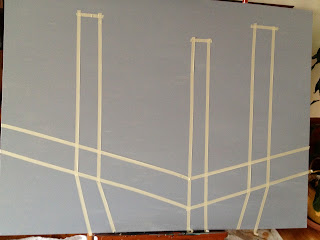 taped off the boundaries.  this little trick is great if you always failed the "can you draw a straight line?" test 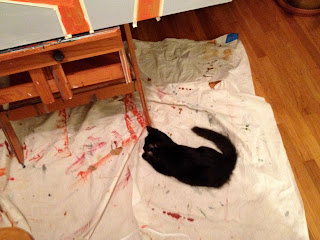 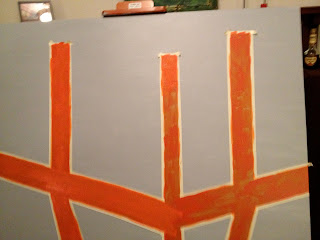 The tower begins to emerge.  I ended up needing three coats of the orange paint (which just happened to be the same orange paint I used on my writing desk) for it to look solid. 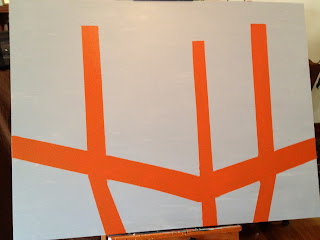 Tape removed.  Removing the tape is by far the most fun part of the process.  I imagine it's like getting plastic surgery and not knowing what you really look like until you remove the bandages. 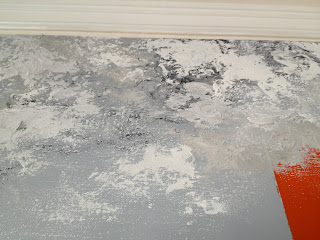 Close up of the fog.  I used modeling paste for the very first time.  A friend had given it to me and I didn't even know what it did.  Googled it and soon found what I'd been missing all my life: the ability to add texture to the paint. 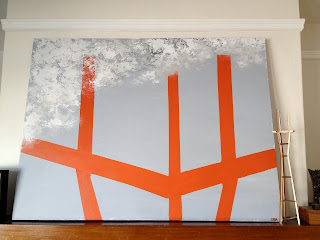 The finished product!  Fog enhanced!
I'm 85% happy with how it turned out, which isn't bad.  I feel slightly less intimidated to try another similarly scaled project.  And perhaps best of all, now when it's too foggy to spy Sutro Tower from out the window (and because I'm in the Inner Richmond, that's like every other day), I have my little version above the mantle.