Will Work For Metaphors

December 26, 2012
Christmas was great and all that good stuff, but what I really want to write about is how I just repaired the dryer.  Myself.

First it must be noted that the reason why it needed to be repaired is my fault: I love to clean out the lint catcher thing.  I find it very satisfying.  So two days ago I did just that in preparation for a load of wash to dry.  But while the lint catcher thing was out (I could google the official name of said piece, but really), I also decided to rearrange the overflowing recycling bag that sits upon the dryer.  It sits there so that it's less at kitty-nose-height, as it usually is on the floor.  Recycled kitty canned food is just too tempting for Scrabble and Clue.  Unfortunately, in my rearranging I managed to knock a cardboard food cover thing from the recycling bag into the now open lint chute.  And down it went.  As irretrievable as ever a cardboard food cover thing could be.

Hoping that somehow the dryer was smarter than me and it would figure out a way to helpfully expel the thing, I decided to run the dryer anyway.  Unfortunate sounds ensued.  But it was Christmas and I couldn't be bothered with home repair, so it was left for today.

In order to retrieve the offensive piece of cardboard, the entire back of the dryer had to come off, and the chute removed as well.  That part took a very long time, because as it turns out, between Dan and I we only seem to own three useful tools, and none of them worked just right.  So, as the swearing at the dryer began (all on my part: I shooed Dan from the laundry room, determined to do this myself), I slowly and painfully removed the back of the dryer, all the while trying to figure out how to make this experience literary.  I thought: of course, not having the right tools (i.e. not knowing enough about the craft of writing) makes things harder than they should be.  Or, sometimes cardboard (i.e. overwriting) clogs up something that was otherwise working just fine and you have to go in after it, otherwise the whole thing just doesn't work at all.  After about twenty minutes or so, I rescued the culprit from its death trap in the lint chute and felt very impressed with myself and the metaphors I was coming up with. 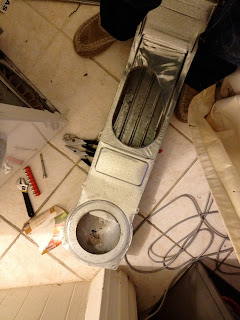 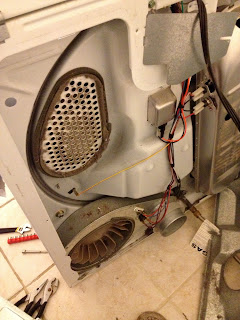 I love metaphors.  I grew up with them.  As the daughter of a pastor, I would sit in church and while my dad was preaching, I would come up with parallel sermons in my head, often utilizing a satisfying metaphor to persuade the imaginary audience in my mind.  In my mid-twenties in Seminary (something I still need to figure out how to talk about and then blog about how I figured out how to talk about it), my metaphor skills were really stretched through language studies, deconstructing the parables over the cafeteria dinners, and the Metaphor Game that I used to play with myself whenever I saw a particularly interesting street sign (One Way, Not a Through Street, and Yield could really all mean so many different things about life, the universe and theology). 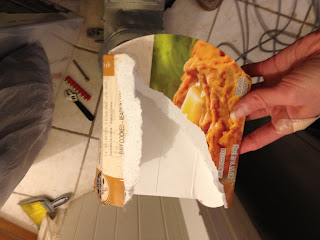 The culprit: sweet potato mashed potato box cover.  It doesn't even look like it should be able to fit down a lint chute does it?

All that to say that my search for the appropriate literary metaphor in my dryer repair project kept me entertained for the first half hour.

Unfortunately, reassembly of the machine proved much harder, so the last hour was just spent swearing.