January 24, 2013
The terrain in Iceland was like nothing I'd ever experienced before.  It truly feels like the ground is still forming in places (and it actually is: along the Mid-Atlantic Ridge for instance, the ground is moving apart and together by incremental but significant proportions every year).  I encountered dark, porous lava rock, snow-covered mountains, icy ponds, white-blue mineral rich hot pools, the glassy Atlantic ocean, a giant crevasse-like waterfall.  There are some trees in Reykjavik, but not many outside of it.  After scanning many long views of landscapes, it's hard to put your finger on what feels like is missing, and then you remember trees.  The trees you are so used to seeing are missing.

The very first thing I did upon venturing away from the airport when I arrived was to head to the Blue Lagoon.  My inherent suspicion of all things touristic created mid- to low-expectations for the place.  I arrived on the morning of my birthday, I couldn't check into my hotel until later in the day, so the Blue Lagoon provided a place to kill some time.  I was sure that the photos I'd seen on their website were doctored, or that it would feel small.  HOLY MOLY was I dissuaded of that idea. 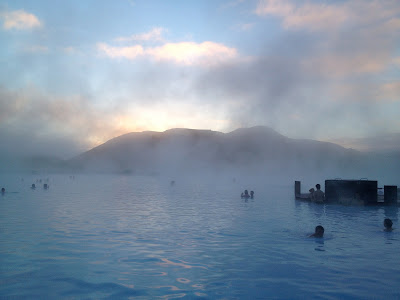 As soon as I stepped in I felt like I was visiting another planet.  The steam enshrouds you, creating a mystery of how far the perimeter extends.  Surrounding the lagoon is the beautiful black lava rock with enchanting crooks and angles.  It is hushed but for the squeals of people emerging from the warm building but not yet in the hot water.  There is silica mud you can slather on, as well as a lagoon bar with fresh carrot juice and beer (that part seemed weird, but it was my birthday, so I got myself a refreshing juice.  It added to the surreal).

That experience set the stage for just how transportive the view was in Iceland.  I hadn't even realized my imagination was so starved for such sights, but it was.  It reminded me of childhood fairy tales by George MacDonald or Hans Christian Anderson, but more so.  It seemed unreal while being entirely real.

There is a deeply held belief and value for the hidden people, or huldufólk there.  Sometimes these are explained as if they were children, maybe 10 years of age, that inhabit the land.  Sometimes it's as if they can be spied in the crevasses and cricks of the rocky hills.  And they exert a real force on the outside world, thwarting construction projects.  As one of the tour guides I encountered explained, "Half of the people in Iceland truly believe in them.  The other half may not believe but would never make fun of this belief.  As for me, I do believe that there is more going on that we can see with our eyes.  And that is all I will say about that."  This idea of there being more that just what we perceive resonated deeply with me.

And then I got to see the Northern Lights.  I don't have a single picture (I used my iPhone for all photographs, and while it's great for many things, it is no good at capturing things in the dark that require any kind of fancy shutter speed).  But I knew I wouldn't be able to get one, so I was completely transported by simply watching them for the better part of two hours.  I took a small boat tour out of the harbor of Reykjavik away from the city lights, and though I don't think I've ever been so seasick (never again will I accept the offer of complimentary cookies before a boat ride), I've also never been so in awe of the sky.  It was amazing.  What no picture I've ever seen of them described to me is that they dance.  They arched overhead like a night rainbow and danced with the wind.  Green-white light spiking and flowing and disappearing then reappearing.  Sometimes glowing over here, sometimes over there, you couldn't actually see it all happening at once, it encompassed such a large part of the sky.  The guide explained that these are always happening within certain latitudes, we just can't usually see them because of the weather conditions (it has to be cold and clear) or the light (naturally, from the moon, or unnaturally from the city).  So it can be hidden from view, but that doesn't mean they are not dancing out there.  How beautiful.

Throughout my trip this idea of more going on than what we see enriched my experience and stirred my imagination.  It reminded me even of what I love about writing, or reading: being able to articulate or see something that is not usually observed.  And even just about life; that we are connected to things we often don't even think about.  I'm not sure I can embrace a belief in the hidden people, but I can't tell you how comforting it is to me that Iceland can.  It makes all kinds of things feel possible.

The next post will be about reading in Iceland.  Until then, enjoy some more Icelandic beauty: