January 09, 2013
On Friday morning I head off to Iceland!  I'm super duper DUPER excited.  I'm going for all the fun personal reasons that traveling is awesome, but also to gain a sensory experience of Reykjavik for my novel-in-progress.  I could write about how I struggle with feeling guilty over such opportunities, how that makes me want to downplay how amazing they are and thus not fully experience them.  But I'm trying to stop being that way, so instead I'd rather write about all the fun facts I've been learning about Iceland in order to get ready for my visit.  In no particular order, these are things that fascinate me about Iceland:

(My sources are a jumble of Meltdown Iceland, by Roger Boyes, Falling off the Map, by Pico Iyer and my shiny new Bradt Iceland guidebook by Andrew Evans)

There's the image you have in your head of a place before you actually go there, and then there's reality.  Right now the image in mine is so amazing I'm afraid the reality can only disappoint.  But I have a sneaking suspicion it won't.  Either way, I can't wait!

I have some specific places I plan to visit, things I want to see from my own and my protagonist's point of view, but I'm also hoping to luck upon sights, sounds and smells that inspire.  If you're reading this and know anyone in Reykjavik (or are someone in Reykjavik) who would be up for meeting me for coffee or a meal while I'm there, let me know. I will devote an entire post to how awesome you are in return! 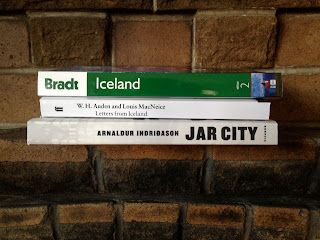 just a few of the books that will be coming with me: My guidebook, of course, and W.H. Auden & Louis MacNeice's Letters from Iceland, plus Reykjavik thriller Jar City by Arnoldur Indridason