January 29, 2013
Iceland has been described as a photographer's dream, what with it's shifting light, moody skies and uniquely vast terrain.  It's also a reader's dream.

Icelanders highly value their literature, beginning with their sagas and continuing through the literary scene today.  I got the impression that many people have jobs, and in addition to their jobs, are artists.  There don't seem to be too many full-time writers, which is often lauded as the ultimate way to be a writer, proving that you are truly committed and you've made it enough to survive without the workaday world.  That didn't seem to be the case there. Rather, there seemed an appealing balance of work and art, perhaps derived from the fact that a smaller population means less competition.  My impression was that people created art less from a need to profit from it, as they already had jobs.  Jobs that did not involve working excessive hours, and did not always have to be full-time because their taxes and the state provided excellent health care and excellent education for all.  I realize it's of course not perfect, but it struck me particularly as I am faced with having to return to the  wq world (tomorrow, in fact, is the one-year anniversary of the Year of Writing, if you can believe it).

Anyway, so there are a lot of artists in the country, creating really interesting art, and a lot of writers.  What I find confounding is how little of it has been translated into english, especially as so many Icelanders are fluent.  It almost made me want to go back to school to learn how to do just that, but then I remembered my student loans.

I have found more translated Icelandic detective novels than anything else.  It can leave you with the feeling that all Icelandic literature is either saga, Halldór Laxness, or detective novels.  I was reading Arnaldur Indridason's Jar City while I was there.  One morning over breakfast a waitress ran up to me while I was reading and handed me a map, circled a neighborhood and said "the murder is here."  I hadn't had enough coffee to catch on very quickly, but as she went on to say it would give me a feel for the story and pointed again at the neighborhood I finally got it.  She rocks!  I was so hoping she would show up again so I could thank her for her suggestion, but I never saw her again (perhaps she was a literary hidden person).  I walked the gloomy Nordurmyri neighborhood where inspector Erlendur solves a generational crime. 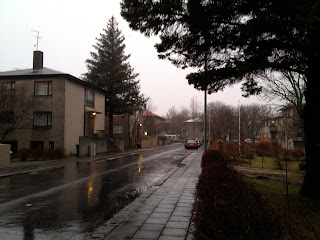 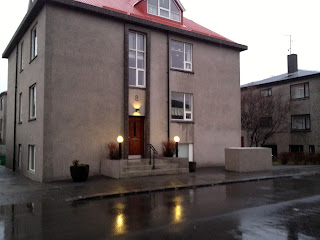 It truly added to the storybook feeling I was already having just by being in Iceland.  The book is fun, by the way, in a dark, murdery way, and has an interesting sub-theme about the controversial genetic database work that is happening there, which is pretty interesting stuff.

I traveled to Reykjavík for the purposes of personal curiosity as well as research for my novel-in-progress.  So perhaps my perspective was already primed for such things, but I was delighted to find quotes from or about literature wherever I went.

And I think I found about 70 references to Halldór Laxness throughout my stay.  Apart from just finding his books anywhere that sold them, he showed up in art, campus posters, recommended tourist destinations.  I did wonder if you're a writer there if you ever began to feel...less than great about the seemingly one man that seemed to embody all Icelandic literature.  Quite a shadow cast by him.

More reading in Reykjavík included close inspection of my guidebook by Andrew Evans, published by Bradt, which I enjoyed so much I might have read it even if I wasn't visiting.  I didn't get very far into my copy of Letters from Iceland, but I did pick up a real find just before departing: LoveStar, by Andri Snaer Magnason.  I had been advised by my trusty guidebook and elsewhere that buying books in Iceland isn't the most economical of ideas (indeed, my copy of LoveStar cost me the equivalent of $25, as opposed to the $16.95 listed US price).  But I've always been able to justify spending too much on a book right before a long flight, and I'm so glad I did.  This book is so over-the-top and fabulous in its science fiction with an overarching human nature/love story I want to reread it right now.  Read this book.  It is good.  We need more like this.  It was originally published in Iceland in 2002, but not available in english until 2012 by Seven Stories Press.  Thank you translator!!!  You made my week! Translators should really receive more trophies, they perform a genuine service to the world.  And I now must get my hands on anything else by Andri Snaer Magnason.

My own novel research (which was a lot of unscientific observation of what certain streets "felt" like, and note-taking on things like how traffic lights looked behaved [they go from green to yellow to red, then back to yellow, briefly overlapping with the red before turning green.  As a pedestrian,  you don't want to be in that crosswalk when the yellow appears]) was fun and an interesting way of experiencing a city.  As I was trying to see things through the perspective of my main character, it made me pay close attention to the sensory details of the city.  At times, however, I got tired of seeing it through her eyes (she's not exactly a bubbly life of the party-type), and had to remind myself to just see it through my own.  What I saw just made me want to read more.


I have one last Iceland report to post (although I plan to keep talking about it to anyone who will listen for a long time).  Thanks for reading!