The Iceland Report, Part One: Thank you, internet!

January 22, 2013
I'm back!  My trip was RIDICULOUSLY AWESOME ALL CAPS KIND OF FABULOUS!  Thus, it's going to take a few posts to cover just how great it all was.  But to start, I have some thanking to do.  In my last post I made a quiet, desperate plea for any potential connection with a local.  And I got one!  Granted, I met many fine people who were part of the tourism industry throughout my stay, but I was so pleased to have a conversation with someone who has a life outside hotels and tour buses (not that there's anything wrong with a life inside such things, and really, if you're going to work in tourism, what an incredible place to do so).  But man am I glad my friend Ryan was kind enough to drop me a line with an email for a friend he'd met long ago who happened to be from Reykjavík.

This is one of those "this is how the internet can be so great" kind of stories.  See, I know Ryan from Princeton Theological Seminary.  Ryan is an amazing person with the most electric sense of humor and quick, huge smile that you might ever meet.  My memories of our mutual gaggle of friends entails much laughter over otherwise mundane things; riding the train into Manhattan, iron skillet meals at truck stop diners, and this coat we called The Beast.

Ryan met Guðmundur through Trinity Lutheran while apparently we all simultaneously lived in Princeton, though it was another decade until I would meet Guðmundur.  Fast forward that decade and sadly I would have lost all contact with Ryan were it not for Facebook (and no, I don't love Facebook, but it has its distinct advantages for those of us who want to know how everyone they've ever known is doing, but don't want to pick up the phone.  One of my favorite features of Facebook is being able to see photos of my friends who've gone on to make a beautiful life for themselves. It makes me happy.)

Anyway, Ryan was kind enough to send me Guðmundur's email, and Guðmundur was kind enough to meet me at Cafe Paris in Reykjavík city center for a cup of coffee and a hearty chat about what life was like there.  He taught me many things, including that the mayor of Reykjavík is a stand up comedian!  I already found the place charming, but this made it even more endearing.  He also tipped me off to some lovely places to eat, and a tour not to be missed (I was resistant because tours are so cheezy in the states.  Not the case in Iceland: they are so well done and allow you to see places you would never get to see if say, you were too nervous to rent a car in the middle of winter in Iceland because you never did learn how to drive on snow and ice when you lived in New Jersey a decade ago.  I'm so glad he talked me into it!  Pictures forthcoming in another post).

We had a delightful conversation about politics, the challenges of the economic situation in Iceland, and books.  It was a distinct highlight in an already mind-bogglingly cool trip.

Thank you Ryan and Guðmundur!!

More to come soon, including more photos of the surreally beautiful landscape, like these: 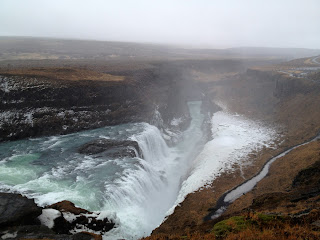 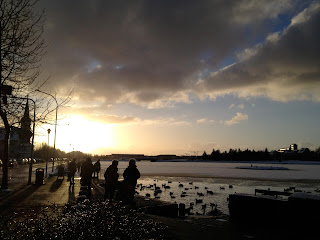 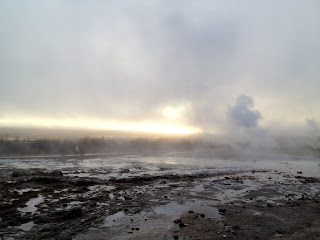