April 01, 2013
In my old life, the end of the quarter meant metrics, metrics, and more metrics. The only metrics in my life right now are how many stories did I send off to journals? How many jobs did I apply for? And how many cups of coffee did it take to do either? But there's something comforting about quarterly reports. It's like a failsafe measure to make sure we don't get so far into the year without reflecting on things that matter.

To that end, I bring you my quarterly reading report, or, my first favorite reads in 2013.

The Revised Fundamentals of Caregiving by Jonathan Evison

This delightful book that I wish I wrote has just the right mix of melancholy and humor. It is the story of a man who is responsible for the tragically accidental death of his children, and his attempt to rebuild his life by rejoining the work force after a decade of being a stay at home dad. He takes a course on Caregiving, and quickly becomes employed as a caregiver to a young man with Duchenne muscular dystrophy. I love this book for a lot of reasons. The humor, which at times struck me as Nick Hornby-esque (whom I love, and also wish I wrote all his books) certainly, and the deft way of handling the humor to balance the extreme sadness in so many passages is quite admirable. But I also love the subject, as I feel like caregivers don't often feature in literature, and that incapacitating feeling of not really being able to help is captured expertly, as well as the way a caregiver can be changed by the people they are taking care of. As a caregiver in my previous life, I found it very resonant. It also has a rather redemptive theme about fathers, and plays this out through several characters who are otherwise rather bad at life. But their caring and trying bleed through the page, and it makes you root for them. 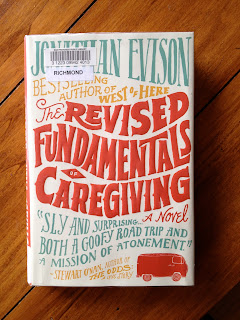 Man, I love this book. I have now influenced four others to read it, and hope to continue this streak. This was the sic-fi novel I picked up from the Keflavík airport on my way out of Iceland in January. There's a puffin factory in this book! Where they scientifically tinker with the puffins to make them even more adorable to tourists! How do you not love that? And while the slightly futuristic, and very Icelandic world goes to hell in a hand basket, there is love. The pursuit of love is broken down into algorithms to create the perfect match, regardless of country or background. The dark intentions and machinations of this thwart one couple who attempt to refuse the computer-generated pairing with another. Disaster ensues. I won't give away the rest, because we need more people to buy this book. But rest assured, the sweet, goofy, dark pseudo-future is a good read.

An Honorable Mention goes to Rebecca Solnit's A Paradise Built in Hell: The Extraordinary Communities That Arise in Disaster. I've been dipping into this non-fiction book for the past several months. It's full of my favorite kind of details of place in time, all related to particular disasters around the world (including a lot of juicy San Francisco details following the 1906 earthquake) and how people responded after. She makes the case that the response is often an example of our best selves, unless it is motivated solely out of fear and seizing control. It highlights the true community that often develops right after a disaster when most often hierarchies dissolve into people helping each other. The only reason this one is only getting an honorable mention is because I'm not done yet. We'll have to wait for the Q2 Reading Report to see how it fares.

I have a short stack of books I've been meaning to get to, but I'm also going to the Friends of the San Francisco Public Library Book Sale tomorrow, so I expect that will be growing soon. Other adventures this week include the first ever Lit Camp! The volunteer staff (including me!) depart Thursday afternoon to join 40 writer/campers and an excellent faculty in an inspiring setting for a brand new writing conference. It actually didn't hit me that I get to attend until last week, when all of the sudden I realized, "Holy cow, I get to learn stuff!" My brain is thirsty for words about writing.

What are your favorite reads of 2013 so far?