June 06, 2013
My man and I took a 24-hour vacation at the beginning of this week: we went camping on Angel Island. If you can't swing a week-long trip this summer, but want to get away for a brief respite, might I recommend a stay. It had just the right amount of effort and relaxation to make the 24 hours feel like several days away.

Let me preface my recommendation by saying that I'm not really a camper, not anymore. When I was a kid, car camping was central to all summer vacations that weren't visiting family (and sometimes even those that were). I'm so glad my parents went to the effort to pack the station wagon with a week's worth of supplies, shove a couple reluctant kids in there too, and head for the national parks. I was probably a total pain about it at the time, whining about it being boring and all, but they are great memories to look back on and so much better than the one time we tried to vacation in a hotel in San Diego (everyone got sick, and I think my dad went to MarineWorld by himself). I fondly recall swimming, and climbing on rocks, and making s'mores, and being all cozy in flannels around the campfire.

Fast forward to adulthood, and I can count the number of times I've gone camping in the last decade on two fingers, with half a digit thrown in for the "glamping" that I did at Costanoa a few times (I HIGHLY recommend this style: tent cabins, but real beds with ELECTRIC BLANKETS! and "comfort stations" with heated floors, sauna, indoor and outdoor showers, and a fire blazing every night with sweet adirondack chairs pulled up to it that are just perfect for reading from with a glass of wine. Bonus: it's just ten miles away from the best artichoke soup ever). So my wus level is pretty high.

Angel Island is not glamping, but it's also not severe. It's harder than car camping, but easier than anything that doesn't also offer a wooden outhouse nearby. It starts with a ferry ride, the most charming form of transportation ever. (Actually, our trip started with the number 5 bus to the 47, neither of which were charming, so I'll gloss over that) The sites are about a two mile hike in, mostly uphill. Wood fires are not allowed, so Dan and I were reunited with another childhood memory: trying to light charcoal briquettes. But if you love hiking around abandoned buildings, this is your spot. The island houses a bunch of old military buildings and an immigration station, so it makes for a beautiful ghost town. 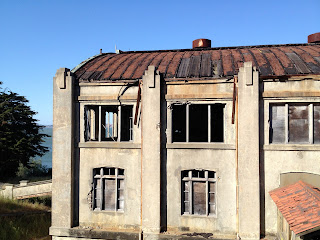 The huge bonus of camping (rather than just visiting the island), is that by about 4pm, all the ferries of tourists have left and you feel like you have the whole place to yourself until about 10:30am the next day. Bring your very best hiking boots, because the real fun is wandering around and up and down taking in the breathtaking views. 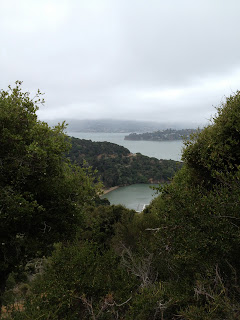 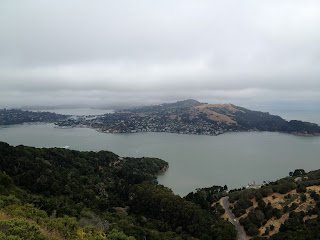 We saw some wildlife. There were very large, self-satisfied raccoons (all camping spots come equipped with bear boxes to store your food, not because there are bears of course, but because the raccoon population will eat everything from your toothpaste to your deodorant. Luckily, I forgot both), and several gorgeous deer: one fawn who almost ran us over and a couple young bucks with fuzzy, short antlers. At night we shined our flashlights into the grove of trees flanking our site and saw several pairs of creature eyes reflected back. And I swear I heard something sniff the contents of the tent--us included--throughout the night. But that could have been the wind, which was pretty terrific (and by terrific, I mean at times it made me grumpy with its incessant blowing).

At the end of our trip, after about seven or eight hours of hiking over the course of our stay, I was very delighted to camp out at the island cafe at the boat dock for lunch while we waited for our ferry ride home. It was positively the best tuna melt and Sunkist I've ever had in my life.

You have to make your reservations early (I say this as a person who tried to go for several years, but never thought about it until July when all the spots were taken), particularly if you want a weekend, but it's not expensive, and it's definitely memorable: the loveliness of an island to yourself, surrounded by softly chiming fog horns and miles of scenic hiking awaits!

Some additional shots from the trip: 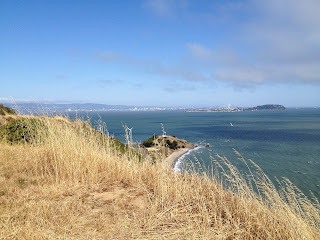