November 01, 2013
Forgive me Internet, for I have sinned: it has been a month since my last blog post. But what a month it has been!

I love October anyway: it's our very best weather of the year in San Francisco, the light is beautiful, the mornings are crisp, and the afternoons are t-shirt-able. Because of this reliably good weather, there are always a million events in October, not the least of which was of course Litquake! I actually didn't get to participate in as much this year as I normally do, partly because I was out of town for my friend Beth's wedding during opening weekend... 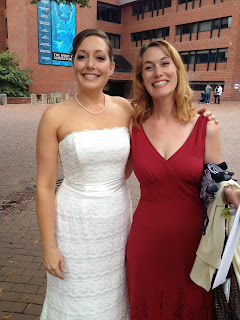 ...which was on the Georgetown University campus and was beautiful. And partly because there were still a million details to pull together for the Lit Crawl.
I am relieved to say all the details came together eventually and it turned out to be an amazing night, despite the BART strike, and last minute venue drop outs, and other general chaos. Our brigade of volunteers, liaisons, curators, and venues were remarkable, and the Lit Crawl committee rocked it something fierce. I was particularly proud of how many first time curators and readers we had, and how wide a variety of topics and styles were represented. And then when it was all over, and we'd all survived, we boogied until 2 in the morning to celebrate.

Oh, and the other enormous thing that happened in October is I got a job! One I'm really excited about! I have been looking really hard for something for longer than I expected to, and there were a lot of discouraging moments along the way. My year of writing became the year and a half of writing, with a side of job searching, and job searching is just incredibly draining. It takes a lot of effort to hold out hope. I find it surprisingly creative work, with very little fun in it. The whole process is something I definitely want to write more about, but while I was in the process of searching, I kept quiet about it here, because I often pointed potential employers to my website. But now I've found an exciting instructional design/consultant position at a fantastic company called BlessingWhite, and I start on monday!! Woohoo! As much as I've loved the opportunity to focus just on my writing, I'm really looking forward to using interests and skills that I haven't been able to during that time. I wrote while I worked full-time before the year of writing, and I plan to keep that up in this role as well.

Speaking of writing, I also finished a first draft of my novel! It's terrible, as it should be, but it's done. And it was so much more enjoyable to create than either of my previous attempts. I'm hoping to start revising in late November.

In my last days of freedom before starting my new job I made a quick visit to my cousin to meet her son Henry, who has a fantastic smile. 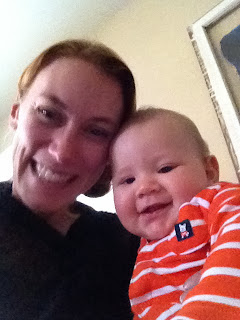 And I've been reading fantastic books: When the Emperor Was Divine, and The Buddha in the Attic, both by Julie Otsuka, and The Impossible Lives of Greta Wells by Andrew Sean Greer. The Otsuka books were part of my phenomenal book club, and we actually got her brother, David, to come speak to our group (the first book especially is based on their parent's experience of the Japanese internment camps). The writing is so gorgeous, and the story both beautiful and painful. These are definitely in my top five for the year so far. The Impossible Lives is really fun, and I think my favorite book about time travel. There is some really interesting social commentary that is so well handled throughout.

October was a full month, a good one, an exhausting one. Onto November!