February 12, 2017
Is there anything better than starting a book and then realizing it's even better than you realized it was going to be? And then still having hundreds of pages ahead of you that you just know are going to be amazing?

I am wildly obsessed with Iceland. I minor in an obsession with the rest of Scandinavia. So, bully for me that it seems more and more novels out of Sweden are being translated and published. I recently picked up Fredrik Backman's My Grandmother Told Me To Tell You She's Sorry at my favorite local independent bookstore, Green Apple Books (shameless plug for a fantastic bookstore you must now visit if you ever find yourself in San Francisco). I had only a vague idea of what the book was about; I had picked it up several times in the past few weeks at various bookstores, read the first paragraph, set it back down. Then I saw the film based on his other book, A Man Named Ove, and was blown away by the depth, humor, and sweetness, and made a quick dash to the bookstore for this one.

It's so freaking good! Seven-year-old Elsa is a very believable and admirable protagonist. Her granny is hilarious, cantankerous, and Elsa's biggest fan. And she's dying. Before she does, she sets Elsa on a great adventure.

That description sounds pretty boring compared to the way storytelling and fantasy play out in the book. The characters she encounters along the way (in reality and in her imagination) are unexpected, the plot-thickening is addictive, and the seven-year-old hyper-smart point of view all worked together to create a universe I didn't want to leave. 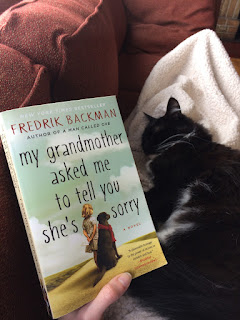 I find it hard to read or see anything these days and not find parallels to our current political reality. This book has a few, even though it has zero things to do with the current political reality (and thank goodness for that; there has to be some kind of balance to all the terrifying headlines that appear hourly). This line from Granny felt a call to arms for those of us who don't fit easily into categories: "Only different people change the world. No one normal has ever changed a crapping thing." And this passage in particular struck me as an appropriate allegory for resistance today, also from Granny:

"The Girl Who Said No" was one of the first stories Elsa ever heard from the Land-of-Almost-Awake. It was about the Queen of Miaudacas, one of the six kingdoms. In the beginning the queen had been a courageous and fair-minded princess very much liked by all, but unfortunately she grew up and became a frightened adult, as adults tend to be. She started loving efficiency and avoiding conflict. As adults do.

And then the queen simply forbade all conflict in Miaudacas. Everyone had to get along all the time. And because nearly all conflicts start with someone saying "no," the queen also made this word illegal. Anyone breaking this law was immediately cast into a huge Naysayers' Prison, and hundreds of soldiers in black armor who were known as Yea-Sayers patrolled the streets to make sure there were no disagreements anywhere. Dissatisfied with this, the queen had soon outlawed not only the word "no" but also other words including "not" and "maybe" and "well." Any of these were enough to get you straight to prison, where you'd never again see the light of day.

After a couple of years, words like "possibly" and "if" and "wait and see" had also been made illegal. In the end no one dared say anything at all. And then the queen felt that she might as well make all talking illegal, because almost every conflict tended to start with someone saying something. And after that there was silence in the kingdom for several years.

Until one day a little girl came riding in, singing as she went. And everyone stared at her, because singing was an extremely serious crime in Miaudacas, because there was a risk of one person liking the song and another disliking it. The Yea-Sayers sprang into action to stop the girl but they couldn't catch her because she was very good at running. So the Yea-Sayers rang all the bells and called for reinforcements. Upon which the queen's very own elite force, known as the Paragraph Riders--because they ride a very special kind of animal that was a cross between a giraffe and a rule book--came out to stop the girl. But not even the Paragraph Riders could lay their hands on her, and in the end the queen in person came rushing out of her castle and roared at the girl to stop singing.

But then the girl turned to the queen, stared her right in the eye, and said "No." And as soon as she had said it, a piece of masonry fell off the wall around the prison. And when the girl said "No" one more time, another piece of masonry fell. And before long, not only the girl but all the other people in the kingdom, event the Yea-Sayers and the Paragraph Riders, were shouting "No! No! No!" and then the prison crumbled.

And that was how the people of Miaudacas learned that a queen only stays in power for as long as her subjects are afraid of conflict.

Perhaps the only thing better than starting a book and realizing it's even better than you realized it was going to be is realizing there's another book by the same author available! And it features a character from the book you just loved! It's off to the bookstore I go.