March 24, 2017
I'm currently helping to create a new leader of leader program (aka a leadership development curriculum for middle managers) for a large pharmaceutical company (a company that is both trying to find cures for cancer and also protect its bottom line). I'm not the lead designer, so it's an unusual (read: often uncomfortable) role for me, but a happy side effect of not being the creator is that I luck upon a sentence or concept here or there and I'm not already so over-saturated on it that I can't find some meaning for myself.

This is a big concept tucked away in a small phrase. In the context of being a leader, overcoming self-limiting beliefs can inspire you to think beyond your preconceived notions and consider greater possibilities for your own style of leadership as well as what you and your team can accomplish. In the context of being a person and a writer it goes so much further and I'm currently marinating in all the richness of what overcoming self-limiting beliefs can mean.

Here's what it currently means for me: as a writer, I've often held myself back by thinking "I can't do that" (i.e. write about something true that could potentially hurt someone I love), or "I can't write in the afternoons," (because I don't feel creative then), or "I couldn't possibly write more than X number of pages in one day" (that number was originally 3, now it's 7). As a person it's meant "I'm not a runner," "I'm not as worthy as X" (where X equals someone else fancier, smarter, or more talented than I), and "I'll never find paid work I love" (because I'm not as worthy as X, and only X should get to be happy and paid at the same time). Even when the goalpost changes (such as 3 pages becoming 7), and progress is made, I still hold onto my notion that there are absolute limits, and I've definitely hit mine.

It's not that there are no limits. There are. But just like we only use about 10% of our brains in a day, we've also probably only hit 10% of our limits. There's at least another 90% of things yet untried.

In my now two months of working part-time in order to write more I've had to encounter this more fully. I have two writing days a week now, two beautiful days where even if a meeting gets scheduled (and they do more often than not), I have the majority of the day and likely the entirety of the morning to write. It's f-ing amazing. My mornings of writing are super productive and satisfying. It's once the morning's run out that I flail. Suddenly I'm a jumble of "I shoulds" that I don't get around to, low-grade guilt, mild anxiety, and a host of good intentions sublimated into trying to keep myself from giving into my baser desires, namely Netflix.

I'm trying to tackle my self-limiting beliefs while at the same time honoring my limits. Truth is, I generally need a nap after a morning of writing. But I don't also need to watch TV. Both rest my brain, but only one satisfies. I often catch myself thinking that I don't have enough time to do X, Y, and Z in an afternoon, so quite frankly none of them happen. I'm trying to will myself to be content with X and a half, with a stretch goal of X and Y instead. It's why I'm finishing this blog post today, regardless of how finished it feels. Incremental progress is still progress, and the sloth is my spirit animal with his slow, persistent (and in the case of the guy pictured below, ADORABLE) path forward. 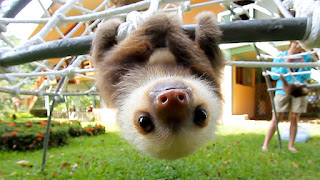 There's more to chew on here, so I hope to return to the topic. For now at least, I plan to keep asking myself: What am I telling myself I can't do, and is it true?