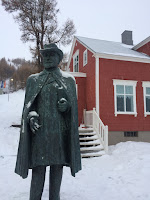 Our four/five-ish hour drive to that night's accommodations was happily bifurcated with a stop at the Myvatn Nature Baths. They were running a funny special: Dan got in for half-off just for being a man. I found out many days later that it was Husband's day (Wife's day is in February), which slightly abated my irked feminism...slightly. This lovely spot is significantly less crowded than the Blue Lagoon (there were only about 15 other people there, 10 of whom were a hilarious tourist group who spent the entire time taking pictures of each other while doing funny poses in and out of the water). We had one of the two lagoons entirely to ourselves as it was just a wee bit less hot than the other one, but was perfect for actually swimming in and had the occasional super-hot jet stream to keep us toasty. Unlike the Blue Lagoon, the scent of sulfur is unavoidable and for those of us bothered by such things (cough, cough, Dan), it was a bit much. My bliss was unencumbered.

After soaking we had lunch in their cafe. I'm pretty sure that was our only eating option along the entire trek actually (one of the downsides to remoteness is you really have to make sure you have enough gas and snacks to last you for at least a few hours). In addition to our lunch of mushroom soup for me and smoked salmon & rye for him, we picked up a loaf of "Geysir bread." This dense, dark rock of bread is made by roasting in the ground for 24 hours and is a chewy delight, especially when slathered with Icelandic butter (which is amazing and yes, we brought multiple sticks home with us).
The experience of driving was like none I'd ever had before. Absolutely everything was white: white snowy roads, white snowy land abutting the road, giant white snow-covered mountains all around, and a sky gone entirely white with wintery whiteness. The only things demarcating the space you should drive on verses what you should not drive on are regularly appearing yellow posts marking your path. The hours of tracking the next yellow post were mesmerizing. It was nearly impossible to know which way was up because the whole world was white. Bear in mind that this is the MAIN ROAD around all of Iceland, not some little side path. There are absolutely no shoulders along the road in Iceland, and almost no turn outs, and most of where a shoulder would be is instead a many-foot drop-off so if you deviate from the road you will find yourself in a snowy pickle. Oh, and just about no one else is on the road, so it will be a long, long time until someone happens by. Needless to say, I became very fond of those yellow posts.
We eventually reached our destination: Ekra Cottage in Lagarfljótsvirkjun (30 kilometers outside of Egilsstaðir). This dreamy little cabin was pure comfort and quiet. By this point I had fallen in love with every bed in Iceland. Each was firm, but not too firm, and came with individual down comforters. That's them in this photo and this is representative of each place we stayed: each twin comforter is folded in half length-wise like a little present waiting for you. 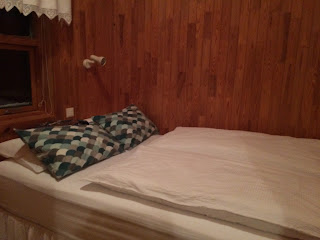 Having your own comforter greatly enhances your ability to achieve the exact overnight temperature you seek. And most beds were actually two twins fitted together, which isn't super romantic, but is actually really useful for preventing any disturbance from the person in the relationship who feels compelled to change positions hourly (that would be me).
We had a meal of fusilli and bell peppers in the cozy kitchen/dining room surrounded by windows. Cloudy conditions meant no northern lights viewing this night, but the darkness was a welcome houseguest.

Seyðisfjörður. Seyðisfjörður is known as one of the most culturally happening of the eastern fjords. The hour and a half drive was harrowing; the snowy conditions + yellow posts were accompanied by steep, snaking, icy curves up and downhill. There is no way you could make that drive without a 4x4 in the winter. We arrived in the charming village to discover almost nothing open. Only one grocery store and one gift shop were open that fine Saturday at mid-day. Turns out that evening announced the beginning of Þorrablót (pronounced Thorblot), a mid-winter festival that is not really open to outsiders--you have to obtain a personal invitation from a local. Lest you feel left out by that, please note that the standard menu involves such Icelandic delicacies as rotten shark, boiled sheep head, and congealed sheep blood wrapped in ram stomach. Yummy!
We walked around the quaint and colorful village and came across many locals who were out walking too, many with strollers which seemed particularly impressive given the snowy sidewalks. These were not the 4x4 jogging strollers of Golden Gate Park either; they were standard, simple strollers. Anyways, I was impressed. 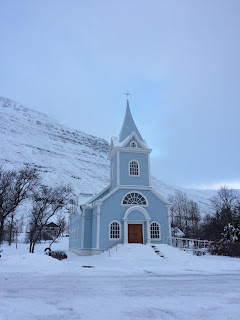 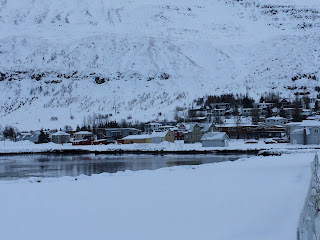 We drove the snaky, slidey road back to Egilsstaðir (which is "the hub" of the East Fjords, which meant that they had a gas station, grocery store, AND one restaurant open) for a delicious meal of cod and mashed potatoes at the Egilsstaðir Guesthouse.
Once back in our cottage for the night, we had yet another fusilli-bell pepper meal and then began the hunt for northern lights. The conditions were optimal: clear, cold, and dark. While hunting (which only involved turning off the house lights and staring out the window, with an occasional step outside the front door to look up above) I saw many more stars than I've seen in years, as well as the Milky Way (I think I'd kind of forgotten about the Milky Way, it had been so long. Sorry, Milky. Don't worry, you've properly re-imprinted yourself now). Around 9pm the faintest white waving sheets began to make their appearance. You wouldn't have known they were there if you weren't looking for them, they looked just like thin clouds. But as the night grew so did they, and eventually we had an enormous green-white arc over the entire sky lit up like a night rainbow. The place is already magical; the presence of northern lights really just punctuates that.

The next (and last) report: more driving through the glorious fjords with surprise guests, Wild Reindeer! (not a band name but totally should be)