At the beginning of 2022 I chose a word for the year, inspired by others who did the same. I wrote it in a journal and mostly forgot about it until the fall. But it worked its magic in the background. My word for the year was INTEGRATION.

I first learned about self-integration in my late twenties when I was also first discovering the transformative power of therapy. Loosely it means seeing all the parts of yourself and your personal history as part of the whole story of you. Being intentional about integration for me has meant being honest with myself about what I want to keep and what I no longer want to carry from previous parts of my life.

2022 had so much beauty and love and positive growth in it for me. But it was also the most challenging year of my life I think, at least of the last two decades. I know I’m not alone in that – I’ve heard from so many friends and family and coaching clients about how the sheer accumulation of challenges in our post-2020 world have taken an extra toll. I know for me that by the summer of 2022 all the ways I’d been able to keep making progress on things dear to me (writing, coaching, becoming the kind of person I want to be) stopped working. My dad’s death and the reorientation in the months after was a big part of that, but only because all that came before was so dang challenging. At the beginning of the year, multiple Covid closures in preschool meant unexpected intensity and uncertainty in my personal and family life. In the spring my dad’s slow, painful journey with Alzheimer’s took a sudden harsh and also gentle turn and he died at home in the care of hospice and surrounded by loved ones. When spring turned to summer and I was wrapping up my coaching program and anticipating the start of a coaching business I was also kind of falling apart in a way that meant it wasn’t the right time to take that leap.

By mid-Summer I stopped being able to get things done. Yes, there was some depression at play. But it was more fundamental than that. And while in it I couldn’t yet give it a name. I like naming things. It helps. So to just live in a nameless state while trying to do what needed doing sucked. A huge part of why I could stay optimistic in the midst of that was my conviction there was something to learn in all of it. But I also knew I wouldn’t be able to learn anything if I didn’t seek some serious repair in the form of real rest. Not just sleep (but lord have mercy, that’s a big part of it too, especially in life with a sleep-challenging toddler), but particularly the kind of restoration that happens while awake too. Good grief, I resist rest! Even though I also crave it and know how powerful it can be, I just want to be able to run at full-tilt! But the body will let you know, and then let you know again before your brain, heart and spirit have caught up to the very real limits that need honoring.

I’m beginning to emerge from the repair stage. I even have less resistance to rest now. And more ideas and ways of resting.

In addition to resting, a big thing that has been helping me emerge is some very intentional integration. In the muck of feeling like I wasn’t accomplishing anything in 2022, I started to re-read all my class notes and journal entries from the start of my coaching program in November of 2021. I wanted to see what I’d learned along the way that I couldn’t remember I’d learned. And I wanted to see if there were patterns emerging that I couldn’t see while I was inside the emergence. 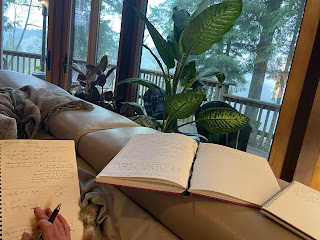 It took me seven weeks to read through it all. Four and a half journals full of my notes from each of the three 3-day coaching intensives (Mods), and all the notes I took during coaching and writing webinars I attended, all the notes I took while I was being coached, all my journal entries in between as I reflected on things, all the notes I jotted down from any podcast that inspired me, and even some of the Notes app notes I took during that time. The sheer accumulation of learning, ideas, connections, shifts, and feelings recorded in all that writing stands as a beautiful contrast to the sheer accumulation of challenges of 2022 and the years prior that still carried so much weight.

It has been so fun to read. So reassuring (yes, actual things were accomplished! Just so much more slowly than I’d wanted. But still, accomplished). So painful (reading an entry from just before my dad’s death, knowing what would unfold just after. Or reading my six-months-ago self have angst over what I was trying to accomplish then knowing it’s still not yet accomplished now). So deeply satisfying.

I don’t want to attempt this exact kind of project again, but I’m so glad I got to do this for myself now. This integration, THE GREAT INTEGRATION as I’m calling it, feels like I’ve invited back all the parts of myself I want and need for stepping into the next chapters of life in a way that begins with more wholeness, strength, authenticity, and joy.

I plan to share a few highlights with you from this year’s-worth of reflection and integration in my coming posts. Not as a triumphant tooting of my own self-development horn, but as a witness to the year. And as an invitation to your own integration if you need that.

Writing Exercise #2 for Setting as Character

March 09, 2012
Today I tromped all over San Francisco to collect sensory details, photos (and a snack or two) from each of the neighborhoods that my novel's characters live in.  Now, they are not real people, but they do live in a real city, so the fun of it all is finding little details that I would never have noticed before because I'm trying to look for them through my character's eyes.  I discovered a few inconsistencies that I'll need to go back and fix (silly things like the wrong bus line, or the fact that type of architecture doesn't appear in that 'hood), and found a few details I will want to pepper the text with.  Mostly, I just had a really fun time walking all over the city (I clocked 6.5 miles of walking!), and BONUS, the water in my apartment was shut off for the day so it really was the perfect excuse to get the heck out.  Oh, and the weather was about as gorgeous as could possibly be.  Okay, now I'm just annoying myself with my own happiness.  Here are som
Post a Comment
Read more