Writing is a Confidence Game

April 12, 2017
Some people just naturally walk around the world feeling like they are hot shit. I'd wager most weren't writers. Oh sure, there are some exceptions: some cock-sure arrogant types who truly believe every word from their pen is golden. They've either been praised too much in their youth or never been workshopped before.

In general though, writers are a needy unconfident bunch. An unexpected side effect of going part-time and tripling my writing efforts is to get way more in touch with this part of myself.

My job has its own cycle of feedback and reward, and mine is not generous in either but I generally know how I'm regarded, and I'm quite confident in about 60% of what I do. The other 40% are either things I'm getting better at, or things I don't care if I ever get better at.

It took me a solid one and a half to two years at this job to feel confident. That's a really long ramp-up time, but universally true for my role in my organization. It's complicated, ambiguous work further complexified by systems that don't work and shifting industry needs.

I've been writing since I was a child, and very intentionally growing myself as a writer since 2003. Fourteen years into that process, having studied for and received an MFA in creative writing, having countless workshops and story swaps to gain useful and sometimes painful feedback, tiny bits of external affirmation through publication, and reams of printer paper sacrificed for handwritten first drafts followed by dozens of re-drafts, thousands of mornings just me and the blank page, and I still find myself questioning if I'm truly a writer.

No book out yet. It's a vulnerable feeling. I'm twitchy that certain people wonder at this lack of progress, I suspect they are beginning to think I should obviously just give up if I haven't made it by now. 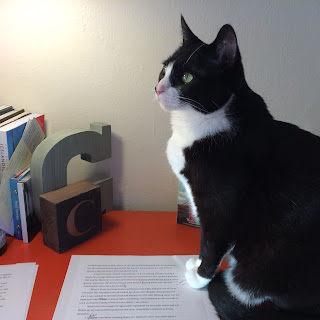 Scrabble, doing her best to infuse the writing
with a sense of confidence and illumination


The itty bitty fierce resilient fighter inside me says: this is how it always feels right before it gets better. Before the payoff. If you do the work. And then, if you're lucky, you'll get to experience the other crises of confidence that go along with getting a second book out. And then another. But if you chicken out now, there are still a lot of years left of life to be disappointed in yourself. If you get quiet, hush the scary voices you've invited into your head just long enough, then maybe....

I can hear her say something akin to my MFA director,


Writing is a game of attrition. Don't attrish.

I'm not sharing this to solicit votes of confidence, to prod others into bolstering my ego. I'm sharing it because it's true, and I know it's not just true for me. So if you too are feeling less strong in yourself than you need to be, if you feel like you're losing in the super un-fun game of confidence, borrow my little fighter's voice if it helps, or give yourself permission to hear your own. Writing is a game of attrition. Don't attrish.