July 09, 2013
The end of the second quarter snuck up on me: it feels like only three weeks have passed since my last quarterly report. Part of the speedy passing of time was from all the good books I've been reading lately. I've already told you how much I loved re-reading The Magic Summer. Here are my other favorites from this season:

Gulp: Adventures on the Alimentary Canal, by Mary Roach. This gem is from one of my favorite local authors. Mary Roach's sense of humor should really get it's own zip code, it's so wonderful. I learned a great deal, sometimes about things I wasn't sure I wanted to know (like how to properly use flatus in a sentence), and I can't tell you the amount of times per week I find myself thinking about the nutritional content of my dinner compared to my cats' on account of this book.


As a delighted listener once said at a reading she did: "You keep writing books about exactly the thing I'm most interested in, except I didn't know I was interested in it until reading your book." There's a lot of pressure in non-fiction to be overly clever as a way to entertain the reader into learning something. Roach seems to come by her cleverness naturally, and while there is wit on every single page (really, every paragraph), there's also a weight of all the research that went into the subject. If you've ever felt like you're strange for being interested in something obscure, and wanting to know every last thing about it, her books will affirm your curiosity.

Another amaze-balls read this spring was The Modern Library Writer's Workshop: A Guide to the Craft of Fiction, by Stephen Koch. My friend and fellow fiction workshop-mate, Nate, tipped me off to this beauty. I haven't read a hearty and useful text on writing fiction in a while, so this one felt like having a delicious smoothie for the brain (and there are no weird metaphors like that one in it). What particularly inspired me was the section on novel revision, along with the idea of fast drafts and slow drafts. Koch suggests that if the first draft you've written was a fast draft, then a slow draft might be the next step in revision, and vice versa. As soon as I get to the end of the first draft of my novel-in-progress (I'm more than halfway there!), I plan to re-read this chapter because there were a lot of keen suggestions on how to approach the beastly task of revising a novel. The voice throughout is encouraging, never disparaging (some writing texts are just so full of themselves), and wise. 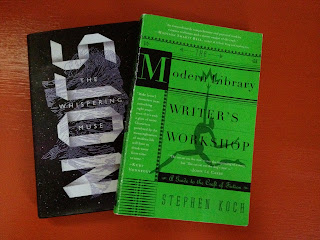 My ongoing obsession with all things Iceland needs to be fed on a regular basis. Reading The Whispering Muse, by Sjón was just ticket. I actually got to see Sjón read at The Booksmith. It's always great to see a writer you like (I'd also loved his Blue Fox) in person, but it's particularly rare to get a writer (or really anyone for that matter) in from Iceland, so this event felt particularly special. He mentioned that he's currently writing a book that follows the trajectory of the people born in the same year he was in Iceland. Given the relatively small population of Iceland (just under 322,000 now), that amounts to only about 3,000 others. A sizable chunk, but manageable. I'm telling the universe now: I want this book translated immediately upon publication. Please. PLEEEEASE.

But to get back to The Whispering Muse, this mythic, witty tale is a fast read (a mere 141 pages), and a fun one. I think one of the things that draws me to Icelandic writing is the intersection of an element that is familiar, often familiar in the way a faint memory from childhood stories of fairy tales lingers way in the back of the mind, mixed with a lightning bolt of something so very other from my experience. This book did not disappoint on either of those accounts.

My book club (unofficially referred to as the book club that doesn't read book club books, or at least mostly doesn't) read Unaccustomed Earth, by Jhumpa Lahiri last month. We all already loved Lahiri's work, but none of us had read this 2008 collection yet. I enjoyed living inside each of the stories, I loved the details, and I loved all the cross-cultural challenges between families and partners. They are beautiful stories, and beautifully told. But...there just wasn't that much going on in them. Or rather, there was only one thing going on in each one. I found myself trying to find the extra layer in the story, but never did. At one point I had to ask myself if I would even love these stories so much if they weren't about a culture I was unfamiliar with. I'm not sure I would. I know there's a lot of discussion (and there should be) about the push for minority authors to only write about minority issues, and about how limiting that is. I wonder if these stories were victims of that thinking. They are still very much worth reading, which is why I'm including the book here. But crossing fingers her next work has more depth.

I just finished Mr. Penumbra's 24-Hour Bookstore, by Robin Sloan. What a fun read! This is a tech-savvy novel for book lovers, and is chock full of great San Francisco references (it's also alarmingly current: I caught a reference to Fruit Ninja in it). One of my favorite references? "I email the organizer of San Francisco's big literary festival, which runs for a whole week and draws free-spending readers from as far away as Fresno," pg. 203. Yep, that'd be Litquake! :) Bonus feature of this hardback edition that I didn't realize at first: glow-in-the-dark cover. It gave off a creepy glow on my nightstand.

That's it for this quarter's report! I'm on to read some Karen Joy Fowler and finish Lydia Millet's Love in Infant Monkeys next. I'm always open to suggestions on what to read next, so if you have a juicy read I'd love to hear about it!